When you meet Jim and Robin Berzowski you learn within a short span of conversation that they are afflicted with a serious case of wanderlust. Together they have traveled to six continents and road tripped extensively throughout the United States and Canada.  When the open road calls, it’s impossible for them not to answer, and since retiring in 2016, the siren song of the natural world has only become stronger for these two world explorers.

“I’ve been an outdoor addict my entire life,” says Robin, a native of Long Island. “All of our vacations while I was growing up were camping. First in tents, then my parents bought a small pop-up camper and we traveled from New York to Florida, Nova Scotia, and numerous cross-country trips.”

Jim’s childhood was also spent outdoors, but revolved around farming, hunting, and fishing in his home state of Wisconsin.  “Deer hunting has always been a fall activity for me and being outdoors in the autumn is an experience hard to describe.”

It’s fun to pull out the map and talk about where we’d like to go. Retirement can conjure up images of cruise ships or tee times, but after successful careers in the IT industry, Jim and Robin are taking a different route and doing what they love most. On any given day, they can be found in the garden, on the trail or water, or planning their next trip. This is squeezed in-between time spent volunteering with a number of organizations focused on food insecurity or social justice. They balance fulfilling their own passions with serving the needs of others. Even in retirement, they work hard to make the most of every day. So, when the world became their oyster, the first thing they decided was how to travel about collecting their pearls. “When we retired, we knew that we wanted do a lot of camping around the country. We considered a pop-up, but most of them had more bells and whistles than I wanted, and they were too heavy to easily tow with our car.”

The GO’s versatility contributes to more than just their traveling life. Jim appreciates that he can help friends move, haul gear and building materials, and transport kayaks locally. “Because of the expandable gear capacity, we had the flexibility to add more gear mid-trip when friends or family met us, which happened in Florida, Alaska, Banff, and the Grand Tetons.”

But for the Berzowskis, all the planning and traveling is about more than amassing pins on a map.  They are also about collecting stories – the gems that are a return on time spent living fully.  Some are large, others small. They can be an unexpected kick-in-the pants or a moment of quiet reflection. And some stories are occasionally given a little something extra – a little spit-shine so to speak, so the jewel will really sparkle. You know when they have a fishing show on TV? They catch the fish and then let it go. They don’t want to eat the fish, they just want to make it late for something.

“We were salmon fishing at Addison Point in Valdez, Alaska,” Jim says. “The fishing was amazing and I highly doubt I will ever experience something like it again. I caught and released roughly 40 salmon in two hours. We did keep five for camp meals.” Jim insists that Robin can vouch for his story. 😉

Forty fish in two hours? Forty-five if you count the guys that got served up on dinner plates. That’s roughly a catch and release every three minutes. Unbelievable. No, really unbelievable.

With a fish story that big, there’s no way they weren’t going to attract some bears. Of course, they increased those odds significantly when they took an epic journey into bear country during the summer of 2019. Jim and Robin had packed up their Honda CR-V and GO camping trailer for a 10 week adventure, traveling from Wisconsin to Alaska and back again. That’s over 12,000 miles of questionable roads, sporadic services, and more wild areas than most of us will see in a lifetime. It’s a dream trip but one that also results in at least a little trepidation when you put the car in drive and set out on the first mile. 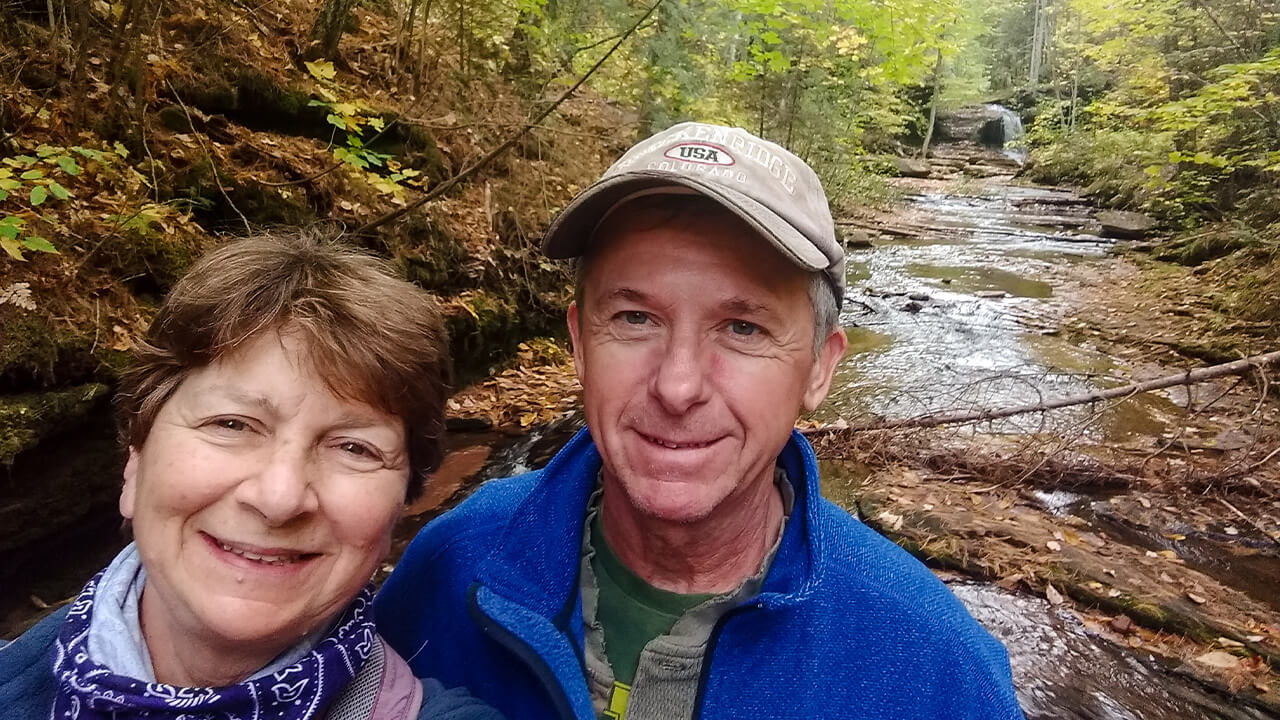 Now, back to the bears. To appropriately set the mood for the Berzowski’s bear encounter in Glacier National Park, keep the following in mind.

Bears have some of the best sniffers in the animal kingdom, catching scents up to 20 miles away. Bears can run up to 35 mph. Bears have unretractable claws between 2 and 5 inches long.

“Two Medicine is a beautiful area located in the southeastern part of Glacier National Park,” Robin says. “We were camping at the campground and set out for a hike on the northern trail along Two Medicine Lake. Jim pointed out there was a bear ahead on the trail and I see him react and . . .”

We will take a dramatic pause in the action to anticipate what Jim’s move will be. Is he planning on dropping to the ground and playing dead, hightailing it back to camp, or finding a sturdy branch and defending his lady-love? And what of the bear? Is he aggressive, out for an afternoon ramble, or just curious like everyone else who first sees a GO and wants to inquire about its weight and towing capacity?

Returning back to Robin at Glacier, “. . . there was a bear ahead on the trail. Jim reacts. He reaches for something. I assumed it was bear spray. Wrong!! It was his phone. He said it was ‘only’ a black bear and after he took a photo he yelled for it to go away. It did. Still, not a shining moment.”

The moral of this story may have less to do with the aggressiveness of bears and more to do with the protective nature, or lack of thereof, of a husband who will remain unnamed. In the end, for the Berzowskis, road tripping and spending time outdoors is about how nature feeds their  spirit and soul.

The outdoors is a gift to all of us. What it boils down to is feeling the wind, seeing the sun rise and set, being with friends and family, being grateful for something I had nothing to do with creating, and having the time and ability to enjoy it.

As each trip comes to an end they return home, put away their gear, and slip their GO into the garage. Before their heads have hit the pillow, they are already dreaming of their next adventure – even as the recollections from this last voyage jangle in their memories like pockets filled with silver.